Vegetarianism, debunked. What next Rachit? Let’s talk about sports! We are both quite avid sports fans, so why not examine what exactly we find so appealing about them. What does it mean to be a sports fan? Why do so many people stress themselves over arbitrary rules and meaningless outcomes?

I’ll start with two items that I think illustrate the fascinating dichotomy of modern sport. First, a quote:

‘Without contraries there is no progression. Attraction and Repulsion,
Reason and Energy, Love and Hate are necessary to Human existence.’ 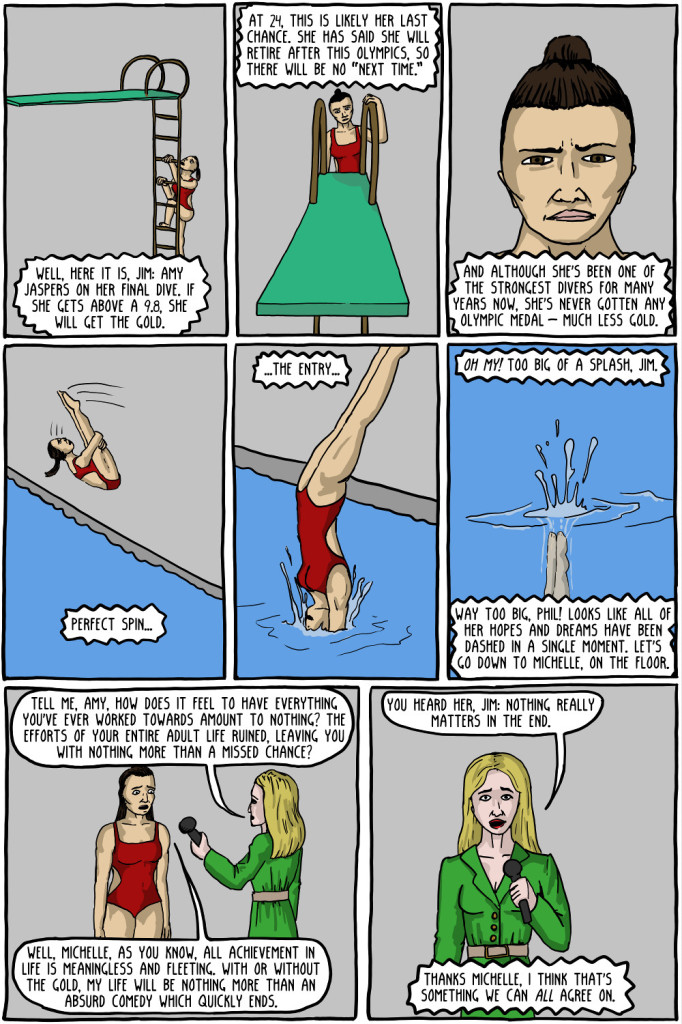 How do we reconcile this? Humans seem to constantly cultivate conflict and rivalries, yet patronize them all the same. Are people also in a state of cognitive dissonance with regard to sport? Why do we revere athletes and pay them so handsomely?

For me, the answer is two fold.

First, humans crave meaning. Sport, despite my earlier assertion, is chock-full of meaning. Wins, championships, awards, TSN turning plays. There are clearly defined and enforced rules with easily discernable outcomes (why do so many North Americans dislike ties in sport? Perhaps because they dilute its purity). In sport, there is a clear opposing side and if the rules are not being enforced or if they are broken flagrantly, there is a ‘higher power’ that can hand down more severe punishment. If only life had such meaning, such definition, such simplicity. But, the question remains: is sport important in the ‘grand scheme’ of things? What possible use could it have in a society?

That brings me to my second point: sport is about community. It is about belonging to a group of people with a common goal. We are a social species, one that was dominated by hunter gatherers for tens of thousands of years. I think we still yearn for some clear common good (acquire food, stay alive) that we can strive for. Sport unites a group of diverse individuals much like wars do – it gives us a common talking point, a unifying rallying cry. Why do we revere superstar athletes? The same reason we revere famous generals (we even give them the same epithets: The Great One, Alexander the Great). The language itself has many overlaps, we use phrases like ‘do or die’ , ‘blitz’, ‘blow out’. Nothing spurs an economy like a successful military campaign, and I think the same can be said (at a much smaller scale of course) about a successful season in sports.

In such a diverse, conflicted, global society, we use sport as a tool to deal with the complexities of the universe. By immersing ourselves, we can find common ground within our community, look forward to clear goals and objectives, and unite in our trials and tribulations.

No matter how cynical my worldview, I will always find joy and passion in bleeding blue with so many other fans. Go Leafs Go!

Categories: The Value of Sports in Society